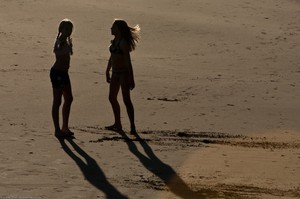 Why are teenage girls using drugs and alcohol?

To some degree, addictions professionals concede that the period of adolescence is a period of experimentation, and that to expect all teens to completely abstain from drugs, alcohol and sex is unrealistic, but they say that the later a teen begins to experiment with such behaviors, the better the eventual outcome.

Teenage girls now use drugs and alcohol more often than their male teen counterparts, and seem to be using these drugs for different reasons. While teenage boys use drugs for the intoxication and excitement, teenage girls are far more likely to use in response to peer or social pressure, or as a way to escape from personal problems or insecurities.

Teen girls perceive enormous pressure to fit within their social environment, and feel an enormous motivation to look and act a certain way. Drugs that may facilitate weight loss, increase self confidence and are used as a part of a peer group of social using friend's can become very attractive. Drug treatment for teenage girls needs to provide programming specific to the needs of teen girls, and treat the very different motivations towards use.

Because teenage girls are just as likely to withdraw as act out behaviorally when abusing drugs or alcohol, it can be difficult for parents to spot abuse behaviors. Parents should be concerned of excessive moodiness, social withdrawal behaviors, and if grades suddenly slip or if old friends are quickly discarded for new and seemingly less savory friends. The earlier drug treatment for teenage girls occurs; the better the ultimate prognosis, and so parents need to stay involved, stay vigilant, and get professional help if abuse behaviors are recognized.

What Are the Risks to Teen Girls?

Sadly, although teen girls are now more likely to abuse drugs and alcohol, they are also the most harmed by the effects of abuse. Teen girls do not metabolize drugs or alcohol as efficiently or quickly as boys and the physical damage of an equivalent quantity of a substance can be far greater in teen girls.

Teen girls who drink or use drugs are 250% more likely to become depressed or suffer other mental health issues; and because teen girls using drugs often become moody instead of acting out, parents often have no idea that abuse is occurring, attributing behavior changes to the normal transitions of adolescence instead of to drug or alcohol abuse.

Teen girls who drink are 63% more likely to become teen mothers and are at a far greater risk for HIV and other STD's. Teen drug and alcohol abusing girls suffer bodily developmental and cognitive delays, and abuse leads to problems and addiction far more readily amongst teenage girls than teen boys.

Because the physical and mental effects of abuse are experienced more quickly and with more intensity, early intervention and drug treatment for teenage girls is vital.

The facility may offer mixed gender programming, but the specific motivations to use, and social pressures as experienced by teen girls leading to the need for drug treatment, should be addressed.

A drug treatment for teenage girls should include behavioral and cognitive training, peer group therapy with other recovering teen substance abusers, an educational and high school equivalency portion, private sessions with an addictions professional, and family involvement.

Cognitive behavioral training, which teaches teenage girls how to change their thinking and behaviors, to reduce exposure to temptations, has been found especially effective; and family involvement and a sustained high level of family participation throughout the drug treatment is one of the best indicators of a successful eventual outcome.

Because teenage girl substance abusers so often suffer from concurrent psychiatric symptoms of depression, an intensive pre intake assessment allows addictions professionals to plan for a recovery strategy best targeted to the needs of the individual. For many, a cessation of drug or alcohol abuse is all that is needed to better mental health symptoms, but continuing psychiatric evaluation throughout a rehab stay allows for appropriate pharmacological intervention if symptoms persist with sobriety.

Drug treatment for teenage girls needs to offer intensive and long lasting aftercare programming, allowing teen girls to consolidate the lessons of drug treatment once returned to the environment of temptation, using the guidance of addictions professionals and within peer support groups.